As an avid student of World War II history, I was so excited about finally getting to see Darkest Hour

*, the latest in a long list of films about the legendary British prime minister Winston Churchill.

“A thrilling and inspiring true story begins at the precipice of World War II as, within days of becoming Prime Minister of Great Britain, Winston Churchill (Academy Award nominee Gary Oldman) must face one of his most turbulent and defining trials: exploring a negotiated peace treaty with Nazi Germany, or standing firm to fight for the ideals, liberty and freedom of a nation. As the unstoppable Nazi forces roll across Western Europe and the threat of invasion is imminent, and with an unprepared public, a skeptical King, and his own party plotting against him, Churchill must withstand his darkest hour, rally a nation, and attempt to change the course of world history.”

But as excited as I was about a new portrayal of Churchill (and I’ve seen plenty), I really thought it was just another re-telling of the story of the Battle of Britain. After all, Darkest Hour

* came out only a few months after Christopher Nolan’s Dunkirk. This movie, however, took a completely different direction than I expected. Darkest Hour revolves around the first few weeks of Churchill’s government, before the Battle of Britain. France hasn’t even surrendered to Nazi Germany yet; in fact, the movie begins with Neville Chamberlain about to resign. We’re very early in the epic “Churchill-at-War” saga.

With the support of his wife Clementine, Churchill accepts a reluctant invitation from George VI (the current Queen Elizabeth II’s father) to form a government. But Churchill isn’t your run-of-the-mill politician. He refuses to negotiate with Hitler even as the German army gains ground at record-breaking speed. He’s unpredictable, volatile, and passionate, alienating and exasperating his colleagues. The horrific tragedy of the Gallipoli Campaign of the First World War, which he oversaw as Lord of the Admiralty decades before, already casts a long shadow over his reputation as a wartime commander. How to gain his nation’s trust and defy one of the greatest tyrants of history at the same time?

This is the story of Winston Churchill’s darkest hour. 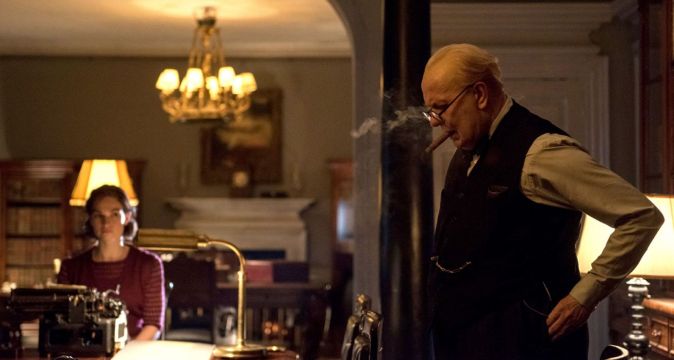 This is more of a political drama than a war film–which, for me, came as a pleasant surprise. Another pleasant surprise came in the form of Gary Oldman! I knew him only as Commissioner Gordon in Christopher Nolan’s Dark Knight Trilogy and as the menacing Soviet terrorist in Air Force One (I like that movie, don’t judge)…but as Winston Churchill? I wasn’t so sure.

Oldman’s portrayal, however, proved original and refreshing. Most movie Churchills are grave, cantankerous, and rarely crack a smile–but here we get a glimpse of his more jolly, whimsical side, especially in scenes with Clementine and with his secretary Elizabeth (played by Lily James). Thankfully, Oldman doesn’t shy away from the prime minister’s vulnerabilities, either. His Churchill can be loud and defiant in one scene, but numb with anxiety and self-doubts the next. (John Lithgow did a fantastic job in The Crown of showing this historically-accurate tension as well.)

But in spite of his fears, England is stronger than even Churchill imagines. During an unprecedented ride through the London Underground he starts asking questions of his fellow passengers: how do they feel about what’s happening across the Channel? Do they think England should negotiate a peace treaty before the Nazis attack? Or are they willing to risk everything for the sake of their freedom?

The Londoners’ plucky answers give Churchill the courage he needs to declare, before Parliament, “We shall never surrender.” And it. Is. Awesome. I had chills during the final scene where Churchill gives that incredible speech. 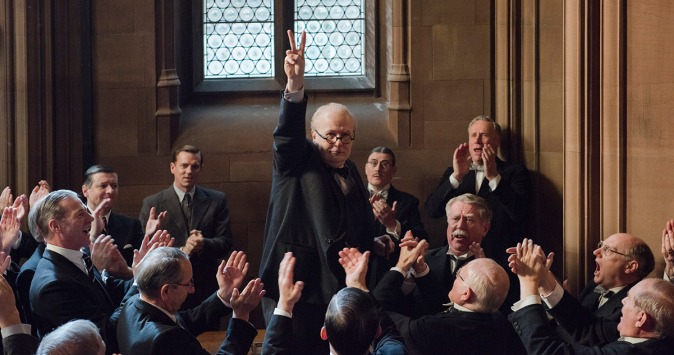 There’s some mild language, but nothing horrific–and no inappropriate scenes. I give this movie a hearty recommendation! John Lithgow remains my favorite movie-Churchill, but Oldman’s is a close second. And if I were to arrange all my favorite Churchill movies in historical, chronological order, the list would look like this:

Have you seen Darkest Hour

* or any other good Churchill-centric films? Read any good books about him (or World War II in general) lately? Let me know in the comments!