Good morning and Happy Labor Day! After spending a glorious weekend at my aunt and uncle’s lake house, sitting on the dock with the wind and waves, enjoying brownies and barbecue, baiting my own fishing hooks with LIVE SHRIMP and also baiting crab traps with FROZEN FISH with my bare hands (see how I rose to the occasion with courage and fortitude?), I’m back in my writing nook. I’m resting up, checking the updates for that tropical storm that’s headed our way (hardly the storm of the century–we’ll be fine)…and still pondering over the beautiful film I finally got to see with my mom, sisters, grandmother, aunt, and cousin this weekend. 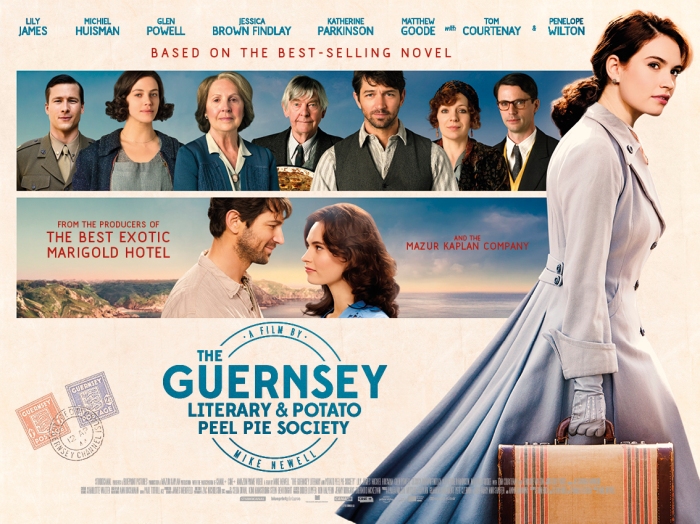 In the aftermath of World War II, a writer forms an unexpected bond with the residents of Guernsey Island when she decides to write a book about their experiences during the war.

* has been one of my favorite books for a long time. In fact, it’s dethroned The Help as my favorite book; I’ve read it more times than I can count, and it never gets old. So when I found out about the new movie I was over the moon–until I also found out it wouldn’t be in American theaters. To add insult to injury, it has only been released to American audiences (so far) on Netflix.

I don’t (and will probably never) have Netflix. It’s one of the few disadvantages of living out in the sticks: satellite internet with a strict bandwidth cap simply won’t permit it.

My grandmother, however, suggested that we watch it while we were at the lake house–and sure enough, my aunt and uncle have a Netflix account and all the other ladies in the family were eager to see it, too! So we unfolded the couch beds, sipped coffee, and crowded around for a cozy afternoon with some of my most beloved fictional friends.

Juliet Ashton (played by the ever-wonderful Lily James) is still adjusting to the realities of post-war life. She wants to write “a serious book,” something completely different from the humorous ones she penned during the war to keep herself and her fellow Englanders from despair. While searching for that perfect subject she begins an unexpected correspondence with Dawsey Adams, a pig farmer on the Island of Guernsey, who tells her about a book club he and his friends formed during the Nazi occupation of the island.

The more Juliet learns about the Guernsey Literary and Potato Peel Pie Society, the more intrigued she is–not only by the idea of books carrying this close-knit community through hard times, but by the members of the society themselves. Most fascinating of all is Elizabeth McKenna, the society’s high-spirited founder…who, for some mysterious reason, is nowhere to be found when Juliet finally comes to visit Guernsey.

Juliet meets resistance, puzzles, and internal conflict along the way, but she’s convinced there’s a story on Guernsey that must be told…if only she has the courage to write it.

The movie did not disappoint. There were definitely some changes from the book, some of which were pretty major–but I understood why they changed what they did. The book is an epistolary novel, which means it’s told solely through letters between the characters (and, at the very end, some hilarious journal entries), and I can only imagine how difficult it must’ve been to adapt a narrative like that to a screenplay. The writers did a good job, in my opinion, of condensing the story for the big screen.

It’s a visually delightful film, too. I want Juliet’s entire wardrobe, haha! And the island of Guernsey–absolutely stunning. The cast couldn’t have been more perfect. Michael Huisman’s Dawsey is exactly how I envisioned him in the book: quiet, hard-working, and gentle. Isola Pribby, the hilarious red-headed herbalist, could’ve been reduced to a two-dimensional caricature, yet Katherine Parkinson played her with such depth and tenderness. Penelope Wilton’s Amelia and Tom Courtenay’s Eben were fantastic, while Jessica Brown Findlay portrayed Elizabeth with fire and compassion. And Matthew Goode as Juliet’s publisher Sidney Stark–ohhhh my goodness. Months ago when I found out who was playing Sidney Stark, I was beside myself. HE WAS BORN FOR THIS ROLE.

But it was a conversation between Sidney and Juliet that made me cry. I can’t find the exact quotes anywhere on the Internet–if someone could direct me towards a transcript I will be indebted to you–but it’s at the darkest point of the story. Juliet is at the end of her rope; she doesn’t believe she’ll ever be able to tell this story, and she tells Sidney, tearfully, “I’m afraid.”

And Sidney Stark, her distinguished publisher and her best friend, he gets down on his knees beside her and says something along the lines of, “Ah. She doubts. She doesn’t believe. She craves being taken seriously but then she won’t do that for herself.”

And that’s when I started crying. Because I’ve been Juliet–I’ve been so paralyzed by fear, I could hardly get a word down–and you know who’s been my Sidney Stark this whole time? My mom, who sat right beside me on that fold-out couch bed, patting my knee gently while I cried and cried and Sidney continued to encourage Juliet, reminding her that she is more than capable of telling this beautiful story: “I think you’re better than you yet know. And as your friend, of many, many, many years, I’ve seen you reach for what you want. You have that courage.” 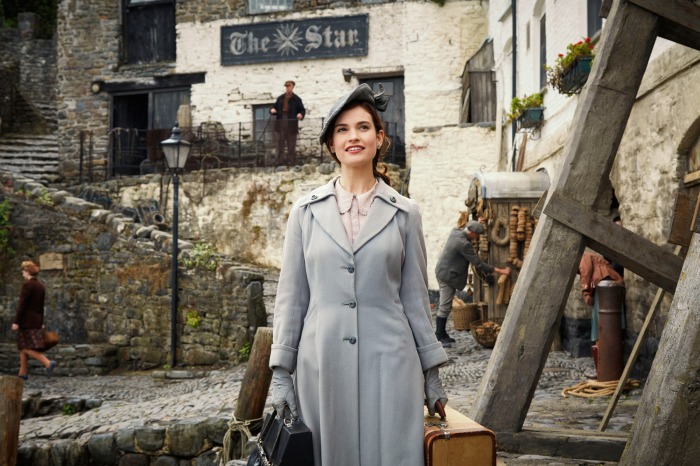 I’m crying again as I write this; that’s how deeply this scene affected me. People don’t often realize just how hard and lonely a writer’s work can be sometimes. We have to remind ourselves, constantly, that all those hours slogging away at plots and characters and research count for something, that we’re doing work that matters. But when we struggle to get those words on paper, or when we’re afraid we won’t be able to do those stories justice, it feels like we’re drowning.

Sidney Stark, however, reminded me (just like my mom does, all the time) that my stories do matter. By God’s grace I do have the courage and the strength to write the stories He’s given me, the ones that need to be told–even though the weight of those stories can scare me half to death sometimes.

“If books do have the power to bring people together,” Juliet tells her Guernsey friends when she sends them her manuscript, “this one may work its magic.” And that is the message of The Guernsey Literary and Potato Peel Pie Society. Stories have power–beautiful, frightening, majestic power–and so long as those stories are full of light and hope and goodness, then they can (and will) carry us through the bleakest times.