*, a Danish film made in 1987, yet I never watched it straight through. But my mom and I embarked upon our ongoing journey of appreciation for the small and beautiful late last year, this movie just kept coming up. Last Sunday afternoon she and I finally sat down and watched it together, and it was absolutely wonderful!

“Beautiful but pious sisters Martine and Philippa grow to spinsterhood under the wrathful eye of their strict pastor father on the forbidding and desolate coast of Jutland, until one day, Philippa’s former suitor sends a Parisian refugee named Babette to serve as the family cook. Babette’s lavish celebratory banquet tempts the family’s dwindling congregation, who abjure such fleshly pleasures as fine foods and wines.” –IMDB synopsis

Now, the above synopsis is a little faulty. “Tempt” is an odd way to describe Babette’s innocent invitation to the feast, and while Martine and Philippa’s father was certainly strict and manipulative, he was anything but wrathful. Martine and Philippa did, however, grow up in a very Puritanical environment–and I do use “Puritanical” in the most negative context possible.

As someone of the Reformed Presbyterian persuasion, I have a deep respect for the heroes of the Protestant Reformation. They gave us God-glorifying works of theology such as The Westminster Confession, defied the tyrannical governments of both Tudor/Stuart England and Bourbon France–and between the Scottish Presbyterians, the English Puritans, and the French Huguenots, one could even argue they founded America. But in the latter part of the Puritan era, especially, they were capable of monstrous legalism. And while Martine and Philippa’s father is actually a Danish disciple of Luther and Melancthon, not John Calvin or the English Puritans, this severe legalism certainly governs every aspect of their lives.

Enter Babette, the elegant and witty Frenchwoman who seeks political asylum in the little Danish village where Martine and Philippa live. Their father is long dead by this point, and in spite of the sisters’ gentle attempts to foster peace and harmony, his dwindling congregation has become embittered and hostile toward each other. Babette, by contrast, brings both color and kindness to the glum, closed-off community, and she and the sisters soon become fast friends.

Then Babette wins 10,000 francs in a lottery. In a burst of happy gratitude, she decides to serve the sisters and their friends a celebratory French banquet. The villagers are horrified when she brings in wine, truffles, quails, caviar, and even a turtle for the feast. Such outlandish ingredients, so different from their own plain and tasteless meals, are surely more at home in a witch’s cauldron! They decide they will NOT, under any circumstances, enjoy that luxurious meal…until they find every self-righteous objection blown away by the sheer force of Babette’s love and joy. 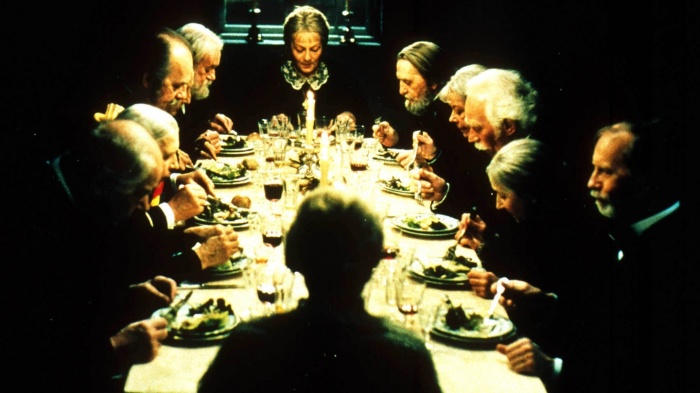 * challenges the viewer in so many ways. It’s about choosing how to properly use the gifts God has given you–about deciding what’s more important to you, fame or family–and about delighting in God’s gratuitous blessings. Some may argue that Babette violated the villagers “weaker consciences” by serving them such a bountiful feast–but I don’t think their consciences were weak at all. They’d simply closed themselves off to God’s generosity, thinking that their own rejection of beauty would make them more righteous in His sight. This deliberate self-deprivation left them grumbling, discontented, and bitter–until Babette’s unconditional love opened their eyes to the rich, undeserved grace of God they rejected for so long.

“The greatest honor we can give Almighty God is to live gladly because of the knowledge of His love,” wrote Julian of Norwich (1342-1416). “Living gladly” doesn’t mean that we should live in licentiousness–of course not! But it does mean that we can, should, and must remember that “every good and perfect gift is from above, coming down from the Father of lights, with whom there is no variation or shadow due to change.” (James 1:17) Our God-given abilities of sight, smell, hearing, taste, and touch are often twisted and perverted by sinful man, but when they’re rightly used, they’re usually the means by which we bless others!

Philippa: “Now you will be poor the rest of your life.”

Philippa: “But this is not the end, Babette! In paradise, you will be the great artist God meant you to be! Oh, how you will enchant the angels!”