CAPTAIN MARVEL. How can I describe the absolute beauty, hilarity, power, and preciousness of this film? I laughed, I clapped, I cheered, I even got a little emotional at one point. It was WONDERFUL.

Vers is a Kree warrior who finds herself caught in the middle of an intergalactic battle between her people and the Skrulls. But when she lands on Earth in 1995, her recurring memories of another life as a U.S. Air Force pilot grow stronger. With help from Nick Fury, Vers tries to uncover the secrets of her past while harnessing her special superpowers to end the war with the evil Skrulls.

–Google blurb (which I edited a bit, because of spoilers)

To be honest, I went into this movie thinking that I was really just here for my last pre-Avengers: Endgame information hunt. The final installment of the Infinity Saga hits theaters at the end of next month, and everyone’s been thinking that Captain Marvel might hold some clues as to how the diabolical, genocidal mastermind Thanos might be defeated once and for all.

I did NOT expect to enjoy this movie as much as I did, however. Right from the very beginning you can’t help but be intrigued by the young, spunky Vers and her relationship with her tough but kindly mentor, Yon-Rogg. Vers struggles with bizarre flashbacks of a life she knows she couldn’t have possibly lived, but Yon-Rogg urges her to exercise self-control and master her emotions as well as these odd occurrences. She won’t be a mighty Kree hero if she can’t accomplish that. 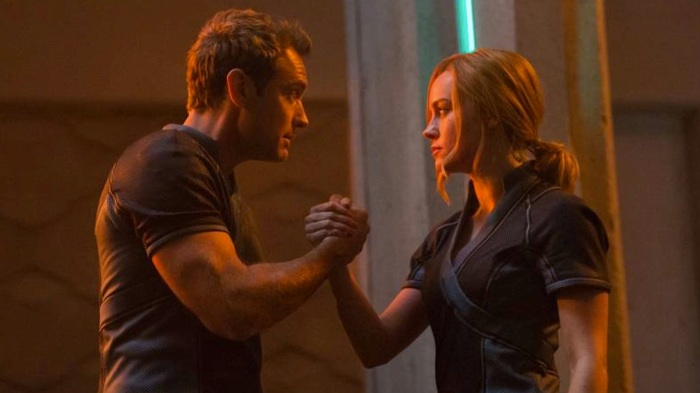 But in the aftermath of a skirmish with the shape-shifting Skrulls, Vers crash-lands on Earth in the mid-90’s. Rather humorously, she even crashes through the roof of a Blockbuster store. All too soon, however, she not only finds herself under attack by the Skrulls, but trailed by a rather young and inexperienced S.H.I.E.L.D. Agent by the name of Nick Fury.

Eventually, Fury and Vers team up: she’s trying to trace these very strange recurring “memories” of a fighter pilot’s life, while he’s trying to keep both eyes on his very first extraterrestrial. But nothing is as it seems. As she gradually pieces together the fragments of her real history–the true story of Carol Danvers–Vers soon faces a terrible choice: will she return to everything and everyone she knows and accept her life among the Kree, or will she defy them and defend the very people she’s always been taught to hate?

Captain Marvel has all the delights we’ve come to expect from a Marvel movie–and as box office numbers testify, nobody’s bored yet. It’s hilarious, it’s tenderhearted, it’s compelling, and it’s action-packed. The usual crude words are thrown about here and there, and one brief shot involved a naked mannequin–but otherwise it’s a clean film, and almost totally devoid of the unsubtle, unappealing “Girl Power” vibe we tend to get from TV and cinema nowadays. In fact, the movie could have been about a guy, and it wouldn’t have changed the plot. Vers/Carol’s heroism had nothing–NOTHING–to do with her gender. It had everything to do with her goodness and her humanity. It just so happened that she’s…well, a girl.

And you know what? That’s AWESOME. Because at the end of the day, the way God made us biologically–the differences He designed between men and women–those are definitely important. And I’ll be the first to say it’s lovely having role models (historical and fictional) who are women like me, because I relate to them in a way I never will with a male character.

BUT it’s the content of character that matters most in storytelling. Any heroine can kick behind and look cool doing it, but that doesn’t automatically make her a good role model for young women (or young men, for that matter). Carol/Vers, however, has so many good and admirable character qualities that make her a worthy heroine. She is tender, thoughtful, respectful, and considerate. She clings to gentle humor and optimism in the face of darkness, and at the end of the day, she stands up not only for the defenseless…but for herself.

Marvel’s ambition, in Brie Larson’s words, was to “make a big feminist movie.” One Influential Christian Site claimed Carol is “the armed princess turned feminist queen, who comes down from the tower to do what Prince Charming could not.” Another insisted Captain Marvel was “a hectoring reminder to hear women roar.”

I strongly disagree with both camps. If Marvel intended on a blatant feminist message, they failed spectacularly–and to quote Shakespeare, those Influential Christian Sites “doth protest too much.” As one of my Twitter friends said, “Captain Marvel wasn’t about a strong FEMALE character. It was about a strong female CHARACTER.” And while we can certainly argue all day long about whether women should be in the military, we should never, EVER diminish the importance of heroes (whether female or male) who are as strong as they are kind, and who refuse to sacrifice their self-respect and principles in the face of political agendas, convenience, or abuse.

Besides…when we look to the incredible capaciousness of womanhood portrayed for us in the Bible through the wise and fiery examples of women like Jael and Abigail, Rahab and Ruth, Esther and the Virgin Mary, perhaps we will find that heroines like Carol Danvers aren’t so far from the mark after all.