After a week’s respite from blogging, I’m happy to report that 1) I’m officially a Camp NaNoWriMo winner, 2) I finished Victoria: Season 3, and 3) I SAW AVENGERS: ENDGAME. Y’all need to give me another week to process (and recover from) Endgame before I share my review, haha. As for Camp NaNo, I’m thrilled with my results, but not quite ready to share any details of my next novel with the world. Sooooooo…

* ever since it was announced, and I closely followed its filming and PBS airing. I also had a great time listening to Masterpiece PBS’ podcasts about the season; each week they featured a different cast member, and I was especially enchanted by the humor and intelligence of Nell Hudson (Nancy Skerrett) and Kate Fleetwood (Princess Feodora). Jenna Coleman’s podcast was, unsurprisingly, a real treat; my mom and I listened to it while running errands one day and thoroughly enjoyed it.

* didn’t quite live up to my expectations. I liked it, but I didn’t love it–not like I loved the first two seasons.

For one thing, I’m getting weary of Daisy Goodwin including a scandalous subplot in every season. It worked with Prince Ernest and Harriet Sutherland because, in the end, we admired them both for their selflessness and restraint towards each other. But the relationship between Lord Alfred and Edward Drummond in Season Two proved a clumsy, underdeveloped attempt to represent the LGBT community, while Sophie Monmouth’s affair with a hunky footman in Season Three

* comes off as far too torrid for an otherwise fairly clean show.

For another thing, there’s a lot of unnecessary drama between Victoria and Albert. Victoria’s half-sister, Feodora, is the source of most of this tension, and if it had some basis in fact, it might not be so tiresome. But there’s no historical evidence that Feodora and Victoria had anything but a loving, trusting relationship. I’m not sure why Daisy Goodwin felt the need to turn Feodora into a vicious cross between Grima Wormtongue and Yzma. There’s more than enough evidence that Victoria and Albert had a tempestuous marriage; you don’t need to conjure up a manipulative half-sister to drive home that point. 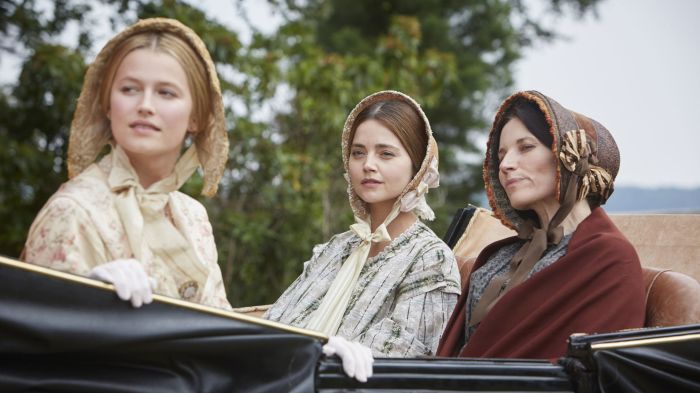 That brings me to my third point: the real Victoria and Albert did have a tumultuous relationship. She had extreme postpartum depression over her seventeen years of childbearing on top of an already-fiery temper, which he responded to with lectures, condescending letters, and, quite frankly, openly chauvinistic complaints. Their marriage improved considerably after she stopped having babies, but she was no Disney Princess…and he was certainly no Disney Prince.

That said, I believe Victoria overplays the drama. Whatever their conflicts, they did love each other and tried hard to work as a team (even if that meant that Victoria grew more and more subservient during Albert’s lifetime). In Season Three

*, however, Albert is downright heartless towards Victoria and their children. I’ve never liked Tom Hughes’ portrayal of the prince, but I truly despised him here. Victoria can be very difficult, yes: she’s hardheaded, emotional, and, in two dreadful scenes, openly disrespectful towards Albert in public. But whereas she recognizes her mistakes and tries hard to remedy them, Albert punishes her by being cold and throwing her faults back in her face. He’s contemptuous of his eldest son, as well, treating him like an idiot and criticizing him mercilessly up until the last five minutes of the final episode.

It’s a massive and probably undeserved exaggeration of the real Albert’s personality, especially since most of his children had fond memories of him and Victoria mourned his death till the day she died. But I still despise his portrayal in this show. If it were strictly fictional, I’d go so far as to say I hated him. But it’s based on history and so I must temper my feelings with my responsibilities as an amateur historian.

THAT SAID, there are some excellent episodes, as well as some new and lovable characters/situations. Nancy Skerrett’s story comes to a tragic close, but not before she finds happiness with Mr. Francatelli. Victoria’s new dresser, Abigail, is hilariously straightforward; I’m looking forward to seeing her relationship with the Queen grow and deepen. The royal children, too, are now old enough to play important roles, adding plenty of humor and adorableness to the story. I found the cholera-centric episode one of the best of the season and especially loved Florence Nightingale’s cameo; I hope we see more of her as the show moves into the Crimean War.

The most enjoyable supporting characters were undoubtedly Lord Palmerston and Prince Bertie. “Lord Pam,” Victoria’s foreign secretary (and interestingly, Lord Melbourne’s brother-in-law) is equal parts intriguing, humorous, and infuriating. From what I’ve read of the real Palmerston, that all sounds about right. And oh, poor Bertie–he tries so hard to please his father, and it’s an impossible endeavor. I wanted to wrap him up and hug him so many times.

As for Victoria…oh, how I still love her. She’s not perfect–not by a long shot. But in spite of her flaws, she always strives to do the right thing by her family and her country. Oftentimes, that balance is hard to strike. But somehow (and this is very accurate to the real Victoria) she knows her own people and her husband better than they know themselves. And she is awesome. A heroine who can tell a boorish duke with icy authority, “You may leave us,” yet put a stammering young doctor at ease by banishing all the servants from the room and quietly serving him tea–that is the kind of heroine I aspire to be and to write.

* wasn’t as good as the first two–but I’m sticking with Victoria in the confidence that Season Four will soon be announced and improve in quality. The Crimean War, Victoria’s final years of childbearing, and Albert’s demise should all be very compelling story material. I’m very optimistic about Season Four’s prospects.