As I take a month’s hiatus from writing new content for my blog, I invite you to revisit with me a few of my old posts. This first one was written in April of 2018 and remains, in my opinion, one of the prettiest posts I’ve ever put together. Enjoy the frills and folderols–and yes, still feel free to leave comments! I’m not ghosting this place completely!

Ever since I saw Cranford (and its Christmas-centered sequel, Return to Cranford) the 1840’s have been my second-favorite decade after the 1940’s as far as ladies’ fashions are concerned. The utterly outrageous hoop skirts of the 1860’s were still twenty years away, while the huge leg-‘o-mutton sleeves of the 1830’s were also falling out of favor. Of course, corsets were in full use and I have no doubt those women smothered during the summertime, but I do think the dresses were simply beautiful and wouldn’t even mind wearing one of them for a day–corset and all–just for the aesthetic and the experience. 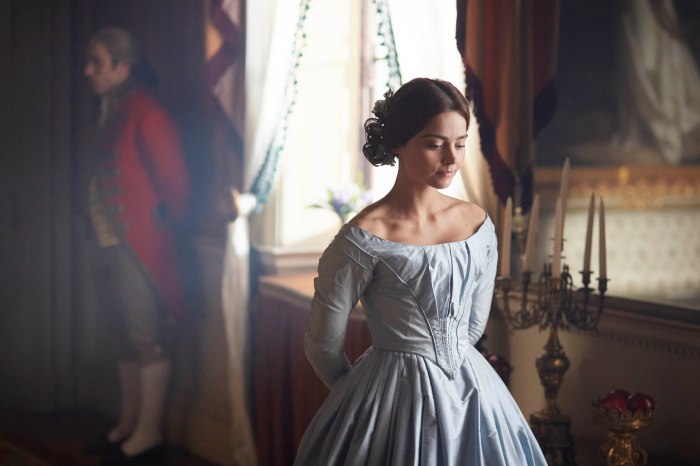 This is why the dresses in Victoria hold a special appeal for me. The series starts in the very late 1830’s, of course, so the first two dresses that caught my eye do feature the fashionably enormous sleeves and dropped shoulders of that decade, as featured in the collages below.

Victoria wears either this navy blue frock or a very similar one with polka dots several times in the first three episodes. The neat thing about both dresses is that she can change the look of it simply by adding a lace collar like this one. She continues to make good use of this ingenious option with nearly all her dresses throughout both seasons. More on that later.

We only get a quick glimpse of her coronation gown, but it’s absolutely lavish. Take a look at the pattern on the fabric–absolutely beautiful. And, to quote the real Lord Melbourne’s actual comment regarding one of Victoria’s dresses, “Amazing sleeves!” The fact that she gave Dash a bath while still wearing this piece of art is both adorable and a little horrifying!

For a long time, this pink dress won my grand prize for “Favorite Dress (At Least In The First Season).” It got bumped down a bit by the Purple Dress (more on that one later), but I still love the collar and the lace hanging from the sleeves–and oh, the color! I know it’s not cool anymore, but I actually do like pink.

I believe it was the show’s costumer (or maybe Daisy Goodwin?) who stated that Victoria’s clothes reflect her growth as a woman. The earlier the episode, the more girlish and “princess-like” her clothes are. The pink dress and the coronation gown are perfect examples of this, but we see a definite shift after Victoria proposes to Melbourne at Brocket Hall. From that point on, her wardrobe starts to mature with her. Gone are the puffed sleeves and girlish patterns. Even her hairstyles change, as seen early on in her courtship with Prince Albert.

I call the dress featured above “the Cinderella gown,” on account of the color and shimmering material reminding me of Lily James’ ballgown in the live-action Cinderella. It’s still on the “princess-y” side, but in the right-hand picture from “The Clockwork Prince” you definitely see the much more grown-up hairstyle coming into play. Note, too, the pointed waist as the 1840’s aesthetic begins to emerge.

The “Proposal Dress” also features a more grown-up hairstyle–and oh goodness, those sleeves–and the ruffles! We get to see this one again the day after Victoria and Albert’s wedding, in much more natural lighting. The candlelight of the proposal scene left me unsure about the color–for the longest time I thought it was pale yellow–but after fiddling with the color/brightness tools on my graphics program, I now think it’s more “peachy.”  Notice the embroidery on the bodice, too!

This powder-blue dress is my sister Anna’s favorite, and my second-favorite. Victoria wears it several times with or without the lace collar and with different hairstyles. But again, the addition of the collar makes it seem like she’s wearing a completely different dress! Only the color and the pleats in the bodice give it away.

Queen Victoria really did love purple, so the dress she wears when she confronts Albert just before their wedding is a historically-accurate costuming choice. And after giving it a lot of thought, I’ve finally decided: this one is my favorite. That deep, rich purple has been my favorite color since I was very small, the dress itself is more on the conservative side (hello, My Personal Aesthetic)–and we’re really seeing the elegant silhouette of the 1840’s that I raved about earlier.

This dress actually shows up for the first time during the “Ladies in Waiting” episode, and I’m pretty sure it’s also the first dress we see with long, close-fitting sleeves! BUT! I strongly suspect it’s also the same dress as the powder-blue one. Either the costuming department re-dyed it or simply used the same pattern, then added a different collar and took the lace off the sleeves. I never noticed it until I started putting this post together!

And last but not least for Season 1, the one I call the “White Tea Dress.” This is the one Victoria wears when she makes a deal with Uncle Sussex about his wife’s title and Albert’s position of precedence. As far as I can tell we only see it once, but it’s positively queenly, isn’t it? It’s the perfect outfit for a scene where Victoria makes incredible use of both her intelligence and authority, but in a restrained, dignified way.

Which one of these dresses is your favorite? Or do you have another one from Victoria: Season 1 that I didn’t mention? Or even an outfit from Season 2? Let me know in the comments!

2 thoughts on “REPOST: The Costumes of “Victoria: Season 1””