REPOST: “All Creatures Great and Small”

As I take a month’s hiatus from writing new content for my blog, I invite you to revisit with me a few of my old posts. This one was originally written in August of 2018 and has been slightly edited. Don’t forget, you’re still more than welcome to leave comments! I’m not ghosting this place completely! Amazon Affiliate Links are marked with an asterisk.

All Creatures Great and Small ran from 1978-1980 to 1988-1990, and was based on the memoirs of Scotland-born veterinarian James Herriot. (“James Herriot” was actually a pseudonym–the real man’s name was Alf White–but for this post’s purposes I’m sticking with the pseudonym.) I’ve actually only seen the earlier (1978-1980) run, but that’s still three seasons with 13 to 14 episodes each, so I’m hardly deprived!

*: young and newly-graduated James Herriot arrives in the village of Darrowby to interview for a job with local veterinarian, Siegfried Farnon. Siegfried offers him the job pretty quickly once James proves his skills as a vet, and with that James (and the audience) are thrust into the often-hilarious (but sometimes-grim) realities of a British farming community. And we’re not talking just any British farming community, but the Yorkshire farming community. These people are hardy, common-sense folk who “don’t like parting with their brass” and turn a wary eye on strangers–but once you prove you’re not an idiot and willing to work hard, they’ll welcome you with open arms.

James himself is an absolute dear. He’s even-tempered, diligent, kindly, and persevering–but he’s not perfect, either. He has a difficult time saying “no” when he should, he’s much too hard on himself, and he worries about what people think of him. But honestly, that just makes him even more endearing and relatable. Especially since he’s such a good guy deep down.

And really, you can say the same for everyone at Skeldale House: they’re just good people. Siegfried, for example: he’s loud and eccentric, often demanding and the king of gaslighting (which can be very annoying)–but deep down he’s a kindhearted soul who tries to do the right thing by humans and animals alike. Siegfried’s younger brother Tristan (AKA “the debauched choirboy”) is the personification of Chaotic Good: he’d far rather spend his days at the local pub than work alongside his brother and James, but you can’t help but roll your eyes and then cheer him on as he learns more about the veterinary practice through actual experience than from books. Helen Alderson, the beautiful farm girl who eventually becomes James’ wife, is a gentling presence among these three wildly conflicting personalities–while the grim-faced but soft-hearted housekeeper Mrs. Hall keeps them all in line. 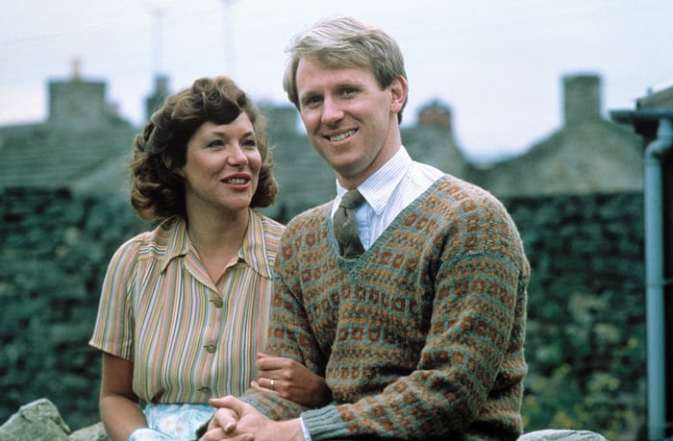 And those are just the occupants of Skeldale House. Throughout the course of the series you meet all kinds of colorful characters from the Yorkshire Dales, from the half-deaf Mr. Mulligan whose wolfhound won’t stop “womitin’ bad,” to the persevering widow Mrs. Dalby who fights to keep her husband’s cattle alive, to the wealthy Mrs. Pumphrey and her spoiled Pekingese Tricky-Woo.

Tristan and Siegfried in the surgery (Google Images)

All Creatures Great and Small is a gentle, humble show. The vividly-written villagers, the challenges and triumphs of farm life, and the gorgeous English countryside are all such a delight to watch! But the older I get, the more I appreciate these good, industrious characters–and I’m encouraged by the thought that while none of them live grand or adventurous lives, they’re perfectly content with their place in the world. They simply do what must be done, with a stiff upper lip and hope for the future.

All Creatures Great and Small is definitely on the older side, so expect some abrupt scene transitions, minimal background music, and that distinctive “look” of 80’s TV. Expect, too, some mild British swearing (also in the books) and very thick Yorkshire accents (thank goodness for closed captioning!). But if you love animals, England, delightful and eccentric characters, and World War II-era stories, be sure to give this one a try!

(The above images contain links to the Amazon pages for the seasons I’ve watched!)

One Comment on “REPOST: “All Creatures Great and Small””