As I take a month’s hiatus from writing new content for my blog, I invite you to revisit with me a few of my old posts. This one was originally written in March of 2019 and has been slightly edited. Don’t forget, you’re still more than welcome to leave comments! I’m not ghosting this place completely! Amazon Affiliate Links are marked with an asterisk.

I’m pretty sure I mentioned in a previous post that my mom and I have been watching Doctor Who together–and it has been fantastic. Her no-nonsense commentary and her indignation if ever I fail to warn her about a Scary Moment are worth their weight in gold. We love Eleven and Twelve the best, agree that Donna Noble and Bill Potts are the most relatable of all the companions, and probably laugh way too hard at Missy. In fact, our only major disagreement has been over whether or not Twelve and Clara are splendiferous together. We’ve decided, with queenly graciousness, to agree to disagree on this subject.

Amid all these adventures with Mom, I’ve had the opportunity to listen to and analyze Murray Gold’s lovely, emotionally-driven music. I’m still familiarizing myself with the music from the Christopher Eccleston/David Tennant eras, so if any of my readers have specific recommendations from those series’ soundtracks, please let me know! I’m most familiar with the music from the Smith/Capaldi years, though…so today, I’m sharing with you my favorite tracks from Series 5-9, almost all of which I listen to every day as part of my Writing Playlist.

I’m also including Amazon links to each track, so you can listen to the sample and/or buy it yourself! “A Good Man?” and “Face the Raven” are the only ones that require you to buy the whole album if you want them; HOWEVER, you can buy them individually on iTunes, and you can still listen to the samples on Amazon.

The Mad Man With A Box 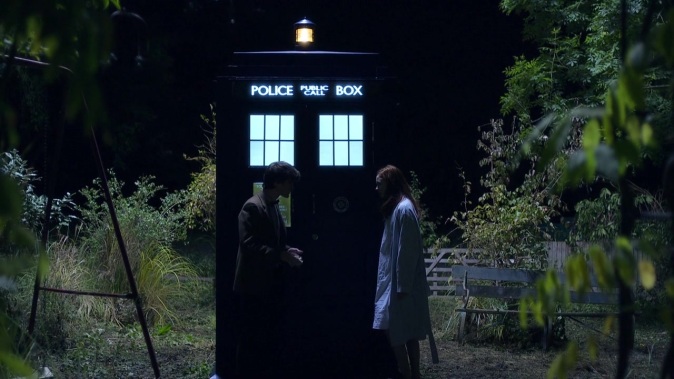 This track’s title is a little misleading. One would assume (as I did) that it’s the Eleventh Doctor’s theme, but it’s actually a more rousing, adventurous version of Amy’s Theme

*. One of the things I love about Doctor Who during Steven Moffat’s tenure is its fairytale quality, and I feel like that really comes through in this piece. The first minute and a half is soft and mysterious, with subdued vocals, a lilting melody, and tinkling chimes in the background. But then it builds to a fierce and triumphant crescendo as Amy Pond finally steps into the TARDIS for the first time with her Raggedy Man, and a whole new adventure begins. 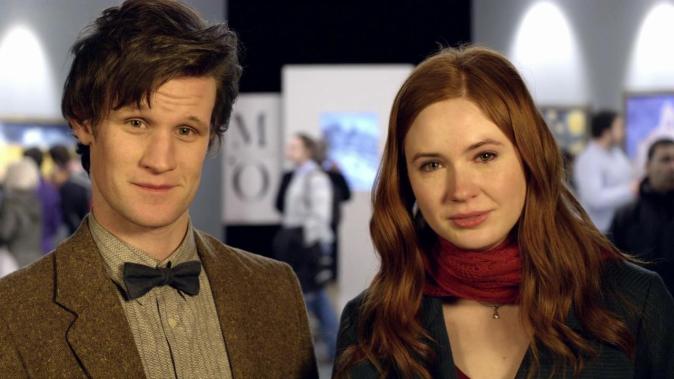 “Vincent and the Doctor” is undoubtedly one of the best episodes of Doctor Who, and this track comes from the final scene where Amy and the Doctor find Vincent van Gogh’s “thank-you note” in the Musée d’Orsay. I love the French vibe; I’m guessing that that’s some type of accordion we hear at the beginning, the same sort of sound you’d hear on, say, the Ratatouille soundtrack. The first half of the piece is light and thoughtful, but swells into a half-orchestral, half-electronic climax as Amy approaches Van Gogh’s famous sunflower painting.

The Enigma Of River Song

It’s hard to describe how deeply I love this piece, which comes from the climactic scene of “Let’s Kill Hitler”–the one where a young, conflicted River Song finds out who she is and what she is destined to become. It starts out dark and questioning, a sad and imploring violin standing out among a subdued orchestra…until River finally makes her decision to save the Doctor’s life. Preceded by an unexpected burst of drums, strings and brass, the violin lets forth a desperate, determined solo that builds and builds and BUILDS until a solo trumpet (or horn?) joins in–and oh, it makes your heart want to explode right out of your chest. (I’m listening to it as I write this, by the way–can you tell my emotions are going ninety to nothing?)

Clara Oswald was my first companion and is still my favorite companion, and this was the first piece of music that jumped out at me when I first watched Series 7 back in the autumn of 2017. Her theme has its own fairytale-like quality, but in a totally different way from Amy’s. Whereas Amy’s theme is more hushed and haunting, Clara’s is light, whimsical, and delicate. The theme does take a short detour into darker, more ominous territory, probably hinting at the baffling mystery of the Impossible Girl–but it rallies right back into a soaring, imaginative melody. 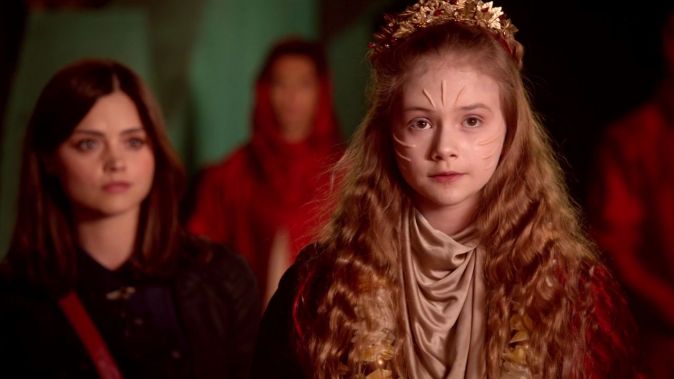 “The Rings of Akhaten” was the episode that made me realize I’d made a very good decision in starting Doctor Who, thanks to its excellent world-building. The repetitive lyrics of “The Long Song” are, in the story, part of a ceremonial and emotional plea for a hero’s assistance–but although they’re grounded in a specific planet’s ancient culture, one might easily assume the words are supposed to apply to a certain heroic Time Lord, as well. About 3/4 through the song the lyrics end and are followed by an intensifying, choral-accompanied climax. I must admit, I love singing along with this one in the car.

This track immediately follows “The Long Song” in “The Rings of Akhaten.” Like “The Enigma of River Song,” there’s a definite melancholy to it–but unlike “Enigma,” it doesn’t include a marked change of mood halfway through the song. This track is used twice in Series 7–the first time on Akhaten, and the second time on Trenzalore, when the Eleventh Doctor regenerates. The Long Song’s refrain, “Wake up,” dominates near the end. I always find it significant when a piece of music is reused for a regeneration scene. It’s like an echo, a clue that that earlier scene must’ve been really important to the Doctor. 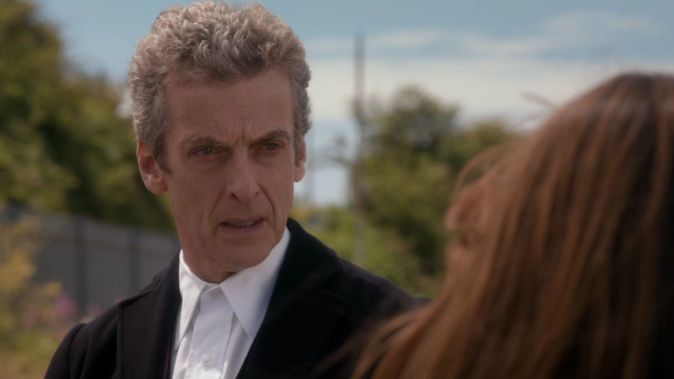 This track starts out very, quiet, very mysterious, and very dark…until a light, questioning melody breaks out about 45 seconds in. From there, the song continues asking the question (“Am I a good man?”), getting louder and more insistent…until you hear the unmistakable whir of a sonic screwdriver. The question is finally answered as the Twelfth Doctor’s epic theme explodes into being. I really love the counter melodies here: the slower, stronger primary melody, played by the brass section, and the much faster secondary melody, executed by a pretty mean string section.

(The Majestic Tale of) An Idiot With a Box

Anyone who knows the emotional significance of this track knows why I love it. It’s got some major counter melodies going on, but why? Because one melody is the Eleventh Doctor’s theme…and the other melody is the Twelfth Doctor’s theme. This track comes from that moment in “Death in Heaven” when the Twelfth Doctor finally comes to terms with himself and his identity. It’s kind of like the musical version of that earlier, visual moment when Clara is on the phone with Eleven while Twelve stands right next to her: just as they’re fundamentally the same exact man, their themes are able to intertwine without discord.

This track may seem like a surprising addition, since I bawled like a baby for the episode “Face the Raven.” Nevertheless, it’s a noteworthy piece, if only because of that one discordant chord in the haunting piano refrain of Clara’s theme. It sticks out like a sore thumb–yet it’s not accidental. It’s actually a great touch: something truly horrible is about to happen, Clara knows it, and it’s traumatic enough to affect her theme. But when the refrain plays again, a little more than halfway through the song, the discordant chord is gone: Clara, by this point in the scene has accepted her fate. I love the solo violin in the last 30 seconds, too. Part of this track is repeated in the episode of “Hell Bent,” when the Doctor and Clara are discussing whether or not they should use the neural block that’ll wipe either his or her memory. 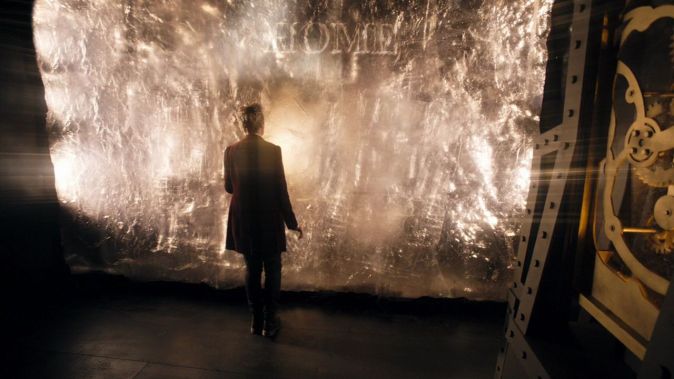 If you listen to no other track in this post, listen to this one. This is from the climactic end of that feat of directing, storytelling, and acting, “Heaven Sent.” This is the scene where the Doctor punches through the diamond wall for four and a half billion years, all while telling the story of a shepherd’s boy and a bird on a mountain. Oh, this track…the melody, the drums, the fierce, defiant climax…this is truly my favorite piece of Doctor Who music, and it will make you want to fight the sun. Interestingly, it’s used THREE OTHER TIMES outside of “Heaven Sent.” A more tragic version plays when the Twelfth Doctor makes his stand against the Cybermen in “The Doctor Falls,” while the original version plays at the end of “Twice Upon a Time” when he regenerates. But the one that made me squeak with surprise is actually in the 50th Anniversary Special, “The Day of the Doctor.” A softer version of “The Shepherd’s Boy” plays during the scene in the Gallifreyan barn when the War Doctor, the Tenth Doctor, and the Eleventh Doctor realize they can save their home planet after all! #FEELS

This simple, soothing, acoustic version of Clara’s Theme is just too lovely to pass up. There’s not much to comment on, really, except to provide a bit of heart-melting trivia: Peter Capaldi really did play this song on his guitar for Jenna Coleman to react against during her last day of filming, and she cried.

Congrats to everyone who got to the end of this post, haha. This one is from the final scene of “The Husbands of River Song,” AKA one of the episodes (along with “The Lodger”) that I watch whenever I need a good laugh. The chorals are gentle and light, while the wind instruments, bells, and piano lend to the shifting moods of sadness, resignation, and finally a joyful surprise worthy of a Doctor Who Christmas special.

Which of these tracks is your favorite? Or do you have a recommendation for me? Let me know in the comments!

← REPOST: “All Creatures Great and Small”
REPOST: The Martian →