Well, my friends, Hurricane Laura has come and gone–and while southwest Louisiana still looks like a war zone a week and a half out, my family and I (in the southeast portion of the state) made it through the outer edge of a Category 4 hurricane without losing electricity even for a minute. Miracles do happen, y’all.

I posted a thank-you message on Instagram, but since it’s been a little over a week I’ll say it again here: thank y’all so much for all the prayers and concerned messages I received before, during, and after Laura’s arrival. We’re so grateful we didn’t get any dangerous weather in our area! But please keep the people of southwest Louisiana in your prayers. My dad was over there this past weekend, helping some friends clean up their property, and he said the destruction is unbelievable. They still have a long, hard road ahead of them.

On a somewhat lighter note, everyone had to deal with the immediate, inevitable result of a hurricane: HUMIDITY. It’s an issue 95% of the time here, anyway, but those days right after Laura moved through felt like a sauna. And she didn’t just turn the humidity up a notch or twenty. She also intensified the ultimate annoyance of Gulf Coast Summertime: love bugs.

“What is a love bug?” you ask. Well, I did some research in anticipation of such a question, and here is what I learned, courtesy of the most benevolent Wikipedia:

The love bug (Plecia nearctica) is a species of march fly found in parts of Central America and the southeastern United States, especially along the Gulf Coast. It is also known as the honeymoon fly or double-headed bug. During and after mating, matured pairs remain together, even in flight, for up to several days.

Not gonna lie: “honeymoon fly” made me snicker. 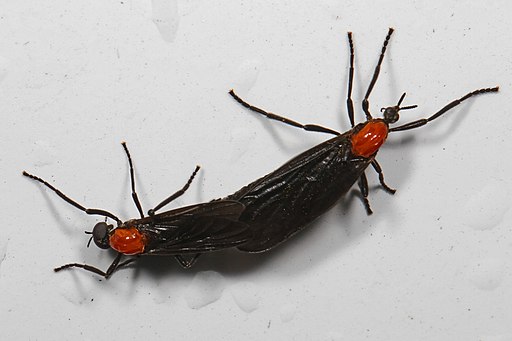 These amorous little boogers descend upon us in droves twice a year, but they’re at their worst in late August and early September…AKA the height of hurricane season. They adore all that warm, muggy air. For some reason they also seem to love the color white? Back in 2008, right after Hurricane Gustav hit us (and left us without power for 9 whole days), we had the worst infestation of love bugs I’ve ever seen. They covered our big white 15-passenger van; they swarmed all over my grandparents’ outdoor refrigerator. And when we hung our laundry on the clothesline (because our generator couldn’t run the dryer), we had to shake the love bugs out of our clean clothes, no matter the color.

THANKFULLY, love bugs neither bite nor sting. They have eyes only for each other, and prefer feeding on clover, goldenrod, peppers, and okra rather than people–which is quite nice of them! Nevertheless they are a complete nuisance…because not only do they conduct their honeymoons in front of God and everybody, but then they take a perverse delight in Romeo-and-Julieting all over the place. “Thus with a kiss I die!” they eventually cry, and proceed to expire all over everybody’s carport, sidewalk, front porch, and threshold.

And if that wasn’t dramatic enough…

Because airborne love bugs can exist in enormous numbers near highways, they die in large numbers on automobile windshields, hoods, and radiator grills when the vehicles travel at high speeds. If left for more than an hour or two, the remains become extremely difficult to remove. Their body chemistry has a nearly neutral 6.5 pH but may become acidic at 4.25 pH if left on the car for a day…[T]he greatest concern is excessive clogging of vehicle radiator air passages by the bodies of the adults, with a reduction of the cooling effect on engines, and the obstruction of windshields when the remains of the adults and egg masses are smeared on the glass.

Somebody please arrange a reconciliation between the Montague and Capulet love bugs before their melodramatic offspring wreak havoc upon the highways.

So! Now you know one of the big reasons we Gulf Coasters get spooked during hurricane season. We’re not just wary of what a hurricane might do. We’re also cringing over the probability of zero air conditioning in 95% humidity…and the strong likelihood of having to shake love bugs out of our clothes 😂

← “A Good Man With a Good Heart”
My Pocket-Sized Rebels →